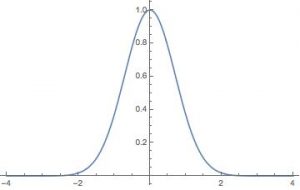 The particle is very likely to be in-between

, almost certainly in that region, but we cannot know exactly where it will be at any instant of time. So what happens when we try to take a measurement of it’s position? Well, in first year physics courses, we are taught that once we try to measure the position of a particle, the wave function collapses to a single point. By taking a measurement, you remove the uncertainty in the position and we know exactly where the particle is. Now although this may sound weird and hard to get your head around, this is beautifully shown in the mathematics behind this.

These wave functions, let’s give them the name

can be expressed as vectors that exist in Hilbert space (I’ll talk about this in a later post!). Now these vectors can be acted upon by things we call operators, functions that operate (do stuff) to our wave function. Now when we take a measurement of position, mathematically, this corresponds to acting on our wave function

with the position operator,

. This is represented as

and this will give us the possible positions that our particle can be in. Now the position operator just corresponds to multiplying our wave function by the function

These operators also satisfy what is called an eigenvalue equation,

is a real number. Now what we hope to do is re-arrange this above equation (which represents us taking a measurement of position) and solve for the eigenvalues, which will in turn give us the possible positions of our particle.

Now this is interesting! What this final line imply about our wave function

(it is non-zero)? Well it means that: 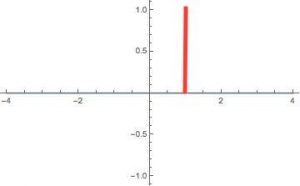 The wave function has collapsed to a single point! So this means that once you take a measurement of position, you know exactly where your particle is. There you go, the mathematics behind collapsing wave functions.